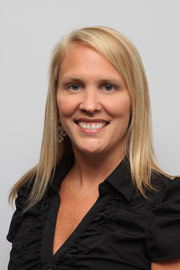 Stephanie joined the Anagnost Companies team in 2005 as the director of corporate operations for the Manchester Wolves, the only arenafootball2 league franchise in New England. After only 3 seasons with the Wolves, she was promoted to General Manager becoming one of the very few women in the country to run a professional sports team. In 2009, Stephanie moved to the development and real estate side of the Anagnost Companies.

As a Realtor, Stephanie enjoys helping buyers and sellers alike with their goals of owning their own home, helping to successfully navigate them through the difficult course to homeownership.

Stephanie grew up in the Manchester area and is an avid sports enthusiast having played varsity sports at both Manchester Central High School and the University of New Hampshire.

In 2009, Stephanie was named as one of the New Hampshire Union Leader’s prestigious “40 Under 40”, which recognizes emerging leaders in the Granite State.